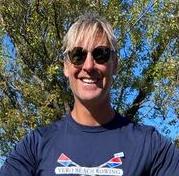 Coach Julio is a  Sport Science Specialist with 20 years of experience. He has trained successful teams and athletes in Argentina, Spain and USA. In 2015, Julio coached the Colombian National Rowing Team at the Worlds in Rio. In 2018, Julio won the World Master Rowing Championship in Sarasota, Florida. He is skilled in Exercise Physiology, Strength and Conditioning.