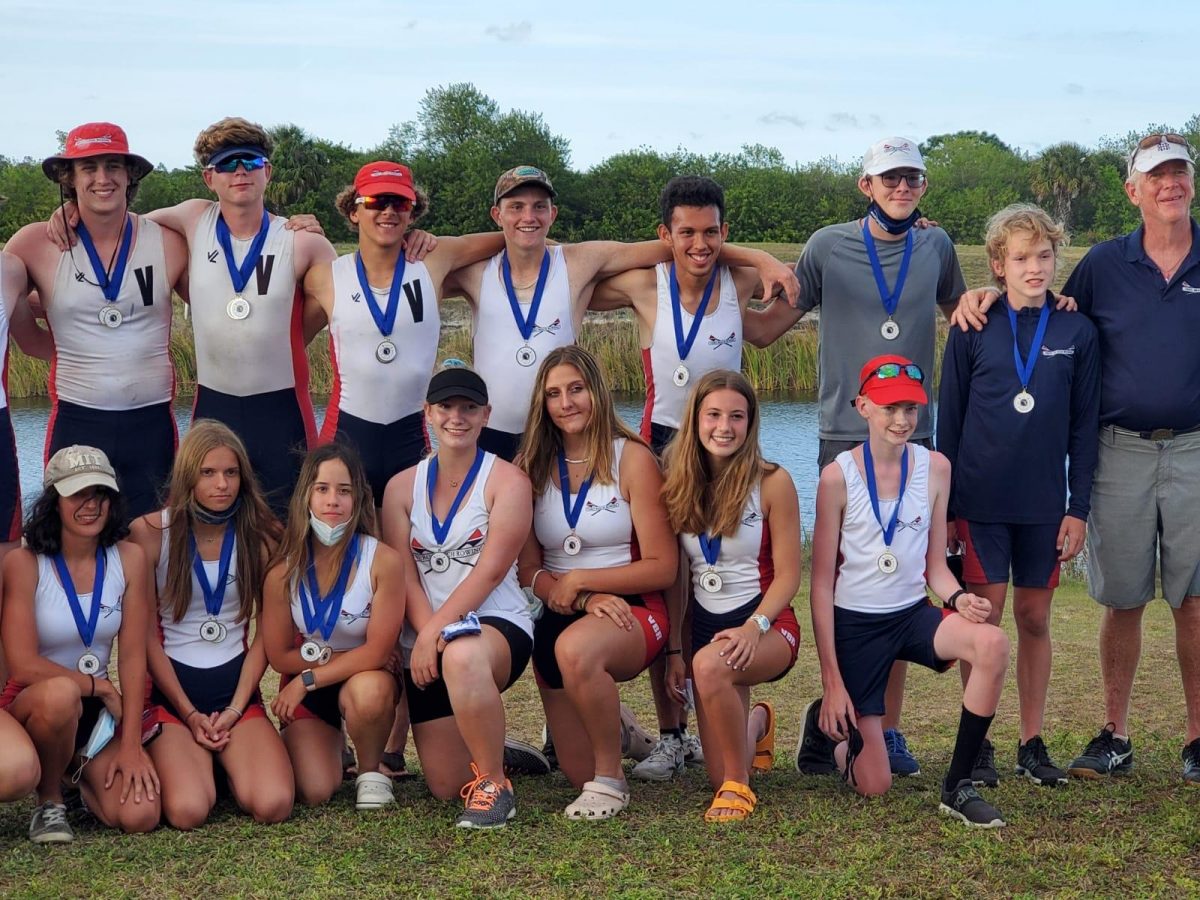 Well Rowed Vero Beach!  12 of our 14 entries were in the medals, 9 of them gold.  The entire coaching staff is very proud of how well all our rowers pushed themselves to find new limits.

Men’s Varsity 4+ – Josh/Nick/Evan/John/Sam not only won their event by 30 seconds, but were also 8 seconds faster than the Treasure Coast 4 (in the Junior 4 event) who had been faster on 2 previous occasions.

Men’s Pair – Wilson and Marcelo were ultimately victorious in a final rerow after the first race was marred by an interfering fishing boat that caused us to collide with Treasure Coast, who wound up flipping. In the rerow final, our pair was a half length down with 250 meters to go when they unleashed an awesome sprint to take a one length victory! check out the videos.

Middle School 4x – Jett/Angus/Addison/Nora had some steering problems but continue to improve, coming 4th just 4 seconds off a medal.

Women’s Freshman 2x  – Liliana and Zadie walked away with both their heat and final to win in style.

Women’s Junior 2x – Lily and Sofia won their heat and took 3rd in the final. Erica and Samara were introduced to racing for the first time and finished 3rd in their heat.

Men’s Freshman 2x – Jozef and Connor won their heat in a time 16 seconds slower than TC A, but cranked up the afterburners for the final and won in style 31 seconds faster than TC this time!

Men’s Varsity 2x – what was supposed to be heats and finals turned into a final-only event, with Nick/Evan 1st and John/Wilson 2nd to dominate the field.

Men’s Junior 1x – With Rory out with an injury, Clark had to race the single, and into a strong headwind won going away!

Men’s Lwt 4x – had a race against 2 Varsity 4x’s in a headwind, rowing technically quite well, and beat one and 3 seconds behind the other. They were given silver medals but we are replacing them with golds as they were the only lightweight crew.

Now we focus on lineups for Sculling States in two weeks – these will be finalized this week so any unneeded hotel reservations can be cancelled without penalty.